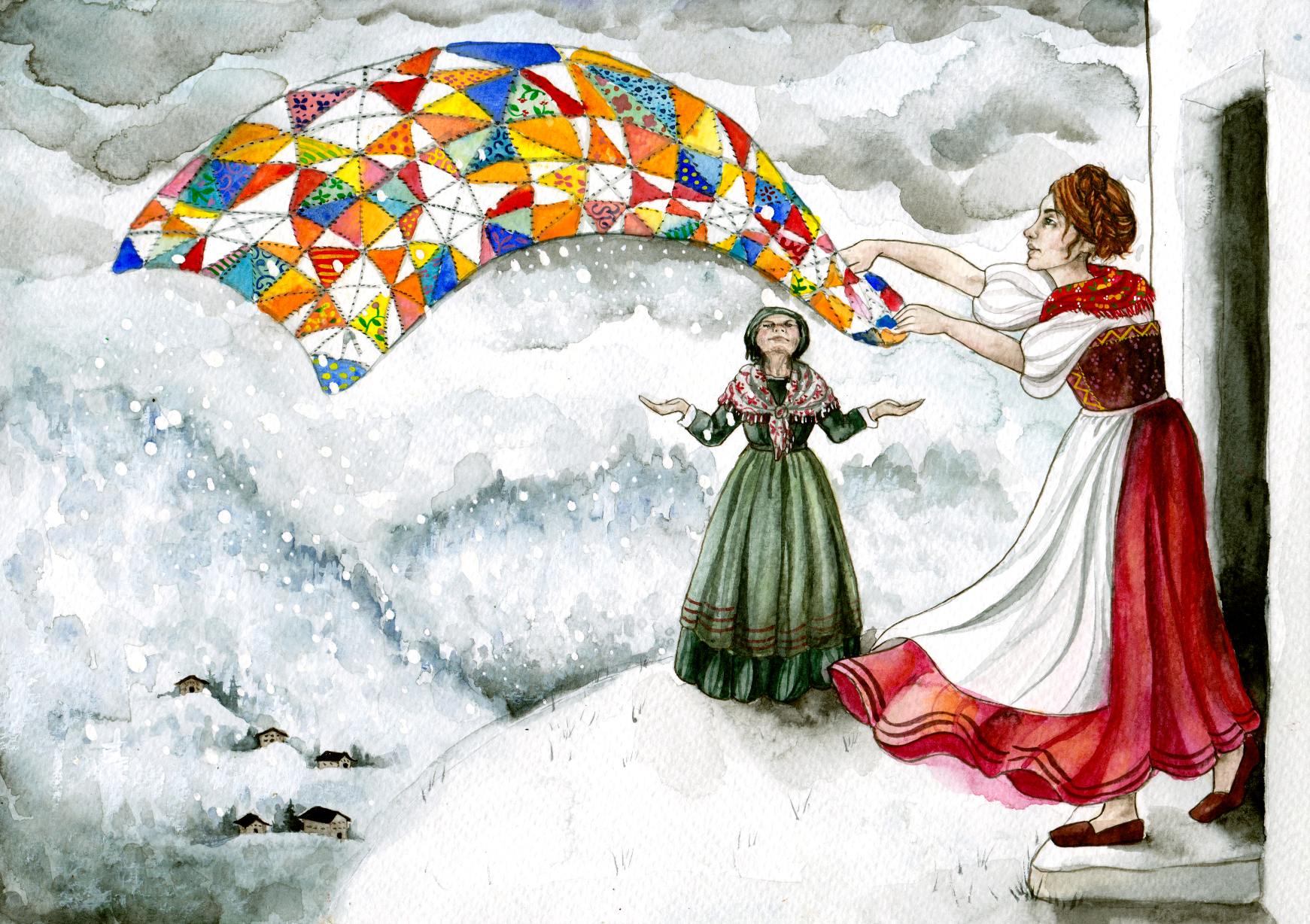 Once upon a time there was a widow who had two daughters; one was patient and worked hard, spoke kindly and was compassionate, the other lay idle all day, was corse in manner and selfish.

Odd as you may think it, the widow loved her idle daughter best, and the other was made to do all the work and was, in short, quite the drudge of the whole household. Every day she must sit on a bench by a well outside the house, and spin so much that soon her fingers were sore and bleeding. Now it happened that once, when her fingers had bled and the spindle was all bloody, that she dipped it into the well, meaning to wash it, but her fingers were so slippery with blood and the water was so cold that the spindle fell from her hand and dropped into the well. Then she ran crying to her mother and told her what had happened but her mother scolded her sharply, and said, “If you have been so silly as to let the spindle drop in, then you must get it out again any way you can.” So the poor little girl went back to the well, knowing not how to begin, and in her sorrow threw herself into the water and sank down to the bottom, senseless.

Time passed and soon she seemed to wake as from a trance; and when she opened her eyes and looked around she saw she was in a beautiful meadow, where the sun shone brightly, the birds sang sweetly on the boughs and thousands of flowers sprang beneath her feet.

Then she rose up, and walked along this delightful meadow, and came to a pretty cottage by the side of a wood; and when she stepped inside she saw an oven full of fresh baking bread, and the bread said, “Pull me out! Pull me out! Or I shall be burnt, for I am quite done enough!” So she ran up quickly and took it all out and left the bread to cool on a table. Then she went on further, and came to a tree that was full of fine, rosy-cheeked apples, and it said to her, “Shake me! Sake me! We are all quite ripe!” So she shook the tree and the apples fell down like a shower, until there were no more upon the boughs. Then she went on again and at length came to a small cottage where on old woman was sitting at the door: The little girl would have run away, but the old woman called out after her, “Don’t be frightened my dear child! Stay with me for a while and help me round the house. My bed must be made nicely every day, and each morning the bed quilt must be shaken out the door so that the feathers may fly, for then the good people below say it snows. I am Mother Holle.”

As the old woman spoke so kindly to her, the girl was willing to do as she said; and so she went into her employ and took care to do everything to please her, and always shook the bed well, so that she led a very quiet life with Mother Holle and was kept warm and fed.

But when she had spent some time with the old lady, she became sorrowful, and although she was much better off here then at home, still she had a longing towards it, and at length said to mer mistress, “I used to grieve at my troubles at home, but if they were all to come again, and I was sure of faring ever so well here, I should not stay any longer.” “You are right,” said Mother Holle, “You shall do as you like; and as you have worked for me so faithfully, I will myself show you the may back.” Then she took her by the hand and led her behind her cottage and opened a door, and as the girl stepped through, there fell a heavy shower of gold so that when she held her apron out she caught a great deal. The old woman put a shining golden dress over her and said, “ All this you shall have because you have helped me so well.” Then she gave her back her spindle too, which had fallen into the well, and led her out by another door. When it shut behind her, the little girl found herself not far from her mother’s house; and as she went into the courtyard, the cock that sat upon the well-head clapt his wings and cried out,

Our golden girl’s come home to you.”

Then she went into the house and as she was now so rich, she was warmly welcomed home. When her mother heard how she came by such riches, she wanted the same good fortune for her other, lazy daughter, so she too was told to sit by the well and spin. That her spindle might be bloody, she pricked her fingers with it, and when that would not do she thrust her hand into a thorn bush. Then she threw her spindle into the well and sprung in after it. Like her sister she woke in a beautiful meadow and followed the same path. When she came to the oven in the cottage, the bread called out as before, “Take me out! Take me out! Or I shall burn, I am quite done enough!” But the lazy girl said, “A pretty story indeed! Just as if I should dirty myself for you!” And went on her way. She soon came to the apple tree that cried, “Shake me! Shake me! For my apples are quite ripe!” But she answered, “I shall take care how I do that, for one of you might fall upon my head,” so she went on. At length she came to Mother Holle’s house, and readily agreed to be her maid. The first day she behaved herself very well, and did what her mistress told her; for she thought of the gold she would gain. But the second day she began to be lazy, and the third still more so, for she would not get up in the morning early enough, and when she did she made the bed very badly, and did not shake the quilt so that the feathers would fly out. Mother Holle was soon tired of her and turned her out; but the lazy girl was quite pleased at that and thought to herself, “Now the golden rain will come!” Then the old woman took her to the same door; but when she stepped through, instead of gold, a great kettle full of dirty pitch came showering upon her. “That is your wages,” said Mother Holle as she shut the door upon her. So the girl went home quite black and as she came near her mother’s house, the cock who sat upon the well, clapt his wings together and cried out,

Our dirty girl’s come home to you.”

The Lady and the Lion
Scroll to top